Migration of the Tundra Swans

**Support your Local Small Town Business while you are in Brownsville, MN!**

UPDATE:  There is still an abundance of Tundra Swans at overlook off of Highway 26, south of Brownsville. The water has still not froze in the area, from what I hear they will stay and feed until they are unable to due to the water freezing!

UPDATE: Currently as of 11-19-2021 the Tundra Swans migration is in full swing. There is an abundance of them at overlook off of Highway 26, south of Brownsville.

UPDATE: Currently as of 11-13-2021 there are still very few Tundra Swans being seen that the overlook off of Highway 26, south of Brownsville. They are predicting warmer weather again this week for your area which may also affect their migration! I will keep updating this site as the migration continues to grow!

UPDATE: Currently as of 11-1-2021 the migration for the Tundra Swans is running late this year! There have not been many Tundra Swans seen at the overlook off of Highway 26, south of Brownsville. I will keep this link up-dated as the migration of Tundra Swans progresses for 2021! 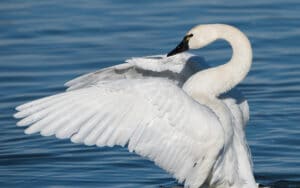 Formerly known as whistling swans, tundra swans are regular migrants through the Brownsville area.  In spring they arrive unpredictably in small flocks and remain for only a short time.  Large concentrations arrive in the fall starting in late October and stay until late November or freeze-up.

Similar species:
The very large Tundra Swan is unlikely to be confused with anything but other swans. White Pelicans, Whooping Cranes, Wood Storks, and Snow Geese are all white birds that from a great distance could look like swans but all have black primaries. The adult Mute Swan can be told from the adult Tundra Swan by its orange and black knobby bill. The adult Trumpeter Swan is very similar to the adult Tundra Swan but it is slightly larger, has a straight culmen (upper bill), the bill has no yellow spot, the eye is enclosed by black, and the white feathering on the head extends in a v shape into the dark bill. In the far northwest, a subspecies of the Tundra Swan shows more yellow at the base of the bill and could be confused with the Alaskan Whooper Swan. The Whooper Swan has yellow in the bill that goes beyond the nostril.

Life cycle:
Males are called cobs; females, pens; young, cygnets. The clutch size varies from 2-8 rough-shelled, pale yellow creamy-white eggs. The eggs hatch in an average of 35 days. The cygnets hatch in late June and stay in families for about one year.  At about 15 months they get their adult plumage.

Family behavior:
Swans mate for life, however, if one of a pair dies the other will find a new mate. The young are precocious in that they enter the water soon after hatching.

Nesting grounds:
Swans gather and pile up grass, sedges, and mosses within 100 yards of the Arctic coastline. The nests measure about 6 feet across and 12-18 inches high. During incubation, females alone care for the eggs while the males stand guard.

Flight behavior:
To achieve flight, swans face the wind, run along the surface of the water for 15 to 20 feet, flap their wings and beat the water with their feet alternately until they have gained sufficient headway to launch into the air. During flight in v-shaped formations, swans achieve speeds up to 100 miles /hour with a tail wind. They have been sighted at elevations of 6,000 to 8,000 feet and have been struck by aircraft resulting in at least two deaths.

Tundra swans rest on Pools 4-11 during the fall migration, moving through just before ice forms on the river. More arrive daily, building up to their peak population during the month of November. By all means swing over to the overlooks along Hwy 26 just south of Brownsville, Minnesota, or south of Goose Island on the Wisconsin shore.

Why Are the Swans Here Now?

These birds of the arctic tundra are migrating to their wintering grounds on Chesapeake Bay and the estuaries of the east coast. Another population of tundra swans migrate to California’s San Joaquin and Sacramento Valleys to spend the winter. Migrating during the day and night, their trumpeting calls are heard at a great distance as they fly along in their familiar V-formation. During flight, the swans can achieve speeds up to 100 miles per hour with a tail wind. They have been sighted at elevations of 6000 to 8000 feet where flocks have been struck by aircraft!

Pools 4-11 of the Mississippi River provide the swans with a place to rest and feed on their way to wintering grounds. While here, the tundra swans feed mainly on starchy bulbs or tubers of plants such as arrowhead (duck potato), wild celery, and sago pondweed. The tubers are buried in the mud on the bottom of the river, but the swans are well equipped with powerful legs, large webs, and prominent toes to stir up the soft mud and dislodge the tubers. With their long necks, they can usually reach the bottom by just immersing their head and neck, but sometimes in deeper water they tip up so that only the tail protrudes above the water. Ducks often feed close to swans taking advantage of the small animal and plant material distributed by the swans.